Sustainable travel doesn't have to be hard! [Sign up here to get new articles by email.] 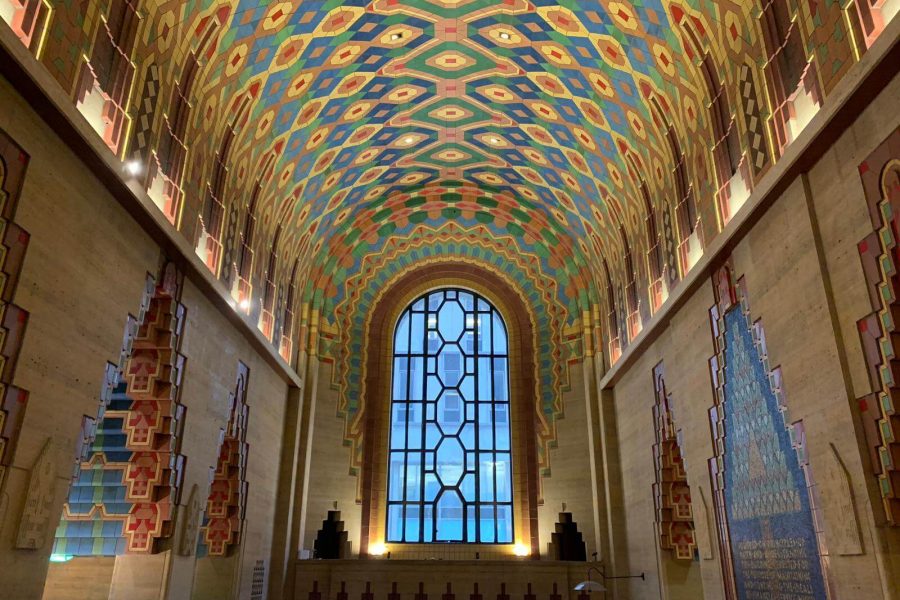 “Do NOT get in line. I will LET YOU KNOW when the train is pulling into the station and I’m NOT gonna let anybody miss it.”

She says this as if it were obvious. But it’s 10:24. Our train should leave in six minutes and still there’s no hint as to whether it’s here or hours behind schedule – which trains in this country are notorious for being.

This particular station attendant actually has a sunny disposition. She laughs at her own jokes, but also clearly takes pleasure in bossing around her confused passengers.

The low-ceilinged station feels more like a room where you might wait to visit a friend in a county jail: One security guard sits at a card table in the middle of the room. But if you want to ask a question, you have to yell through a hole in the bullet-proof glass until someone comes out from the office.

And you will have to ask a question. The only train station in the city of Detroit doesn’t have an arrivals and departures board with real-time info, as you would find in any transportation hall anywhere else in the world. Not even an old-fashioned one with noisy flip-tiles.

It’s now four minutes until departure, and the attendant is walking around the room, pointing at certain people, nodding toward an unmarked door. Presumably she’s directing them onto the platform, but the criteria for who goes and who stays are not clear. (One chosen passenger has a cane, but the attendant never asks if anyone else with a less-visible disability needs extra time to exit.)

She stops in front of a man with a suitcase that could probably fit a Vespa and ridicules him.

“You’re not allowed to have that thing, you know. You’re gonna be sorry. You’ll see when you get there – you’ll be sorry.”

And with that, she sends him out the door.

Having finished the individual selection, it’s time for the next group: “Any business class passengers?”

I sprung for the $30 business class upgrade for this five-hour, 300-mile, trip from Detroit to Chicago, but I’d like to maintain my low profile and board with everyone else.

“Come on – anyone at all? There should be four of ya.”

She’s not going to give up, so I step forward.

“Yeah, there we go,” she says. “I knew it.” I’m pretty sure she’s referring to the fact that I’m one of about three white passengers in the waiting room. She points to a spot on the stained carpet, right in front of her feet and a step from where I am now: “Stand here.”

I assume this means I should stay where I am, but she rolls her eyes, pointing more aggressively at the spot. “No! Here!”

I shuffle half a step over, trying to make her happy, but I am not doing it right.

“Okay, I’m just gonna send you out right now, because you confused!”

I don’t know if she’s lost her patience or if I’ve just become a source of entertainment for her.

Either way, I’m happy to head for the door.

I don’t mean to pick on Detroit specifically with any of this.

On the other hand, maybe it sort of is the Motor City’s fault. This a perfect allegory for the dominance of cars and trucks over our lives in the US.

Detroit is called Motor City, or Mo Town, because it’s home to the “big three” US car companies: GM, Ford and Chrysler. And it’s a perfect example of the design it shares with most US cities – low-density, surrounded by sprawling suburbs, and built to accommodate the flow of cars, not of people.

Just three blocks away from this sad little train station is a building that would fit well in Italy.

The Fisher Building – an extravagantly gorgeous Art Deco style tower with gold filigree on the doors and murals on the vaulted ceiling.

The Fisher was built in 1928 – when Detroit was booming – by a family of auto industry entrepreneurs.

Across town, in the Corktown neighborhood, which is now a mix of gentrifying restaurants and dilapidated houses, is the Michigan Central Train Station. At 18 stories, the station towers over the neighborhood. It was built about a decade before the Fischer – and before the winner of Cars vs. Public Transit had been decided in this country.

Here’s the ironic part: Amtrak abandoned the depot in 1988. Last year, Ford bought it and is reshaping the building into a new tech campus that will focus on developing self-driving cars.

Why does this matter?

Because I’m convinced we can do train travel a lot better in this country.

In so many parts of the world, trains are just normal – they’re efficient, safe, affordable transportation. Here, when I tell people I’m taking the train somewhere, they’re usually a little shocked, as if they had forgotten trains existed. Most people consider Amtrak just one step above the infamous Greyhound busses. (Don’t get me started on how bad we are at bus travel in this country.)

Are we really so obsessed with individuality that we have to design our country for inefficient, expensive, highly polluting, relatively unsafe cars?

We tell ourselves this is on purpose because we are Americans and we love cars. But really? Do we love sitting in traffic? Breathing dirty exhaust air? Having double or triple the rate of car accident deaths per capital compared with most of Europe?

Why do we choose to put up with all of that, and put up with an inefficient train system that feels literally third-world?

Cars don’t have to disappear, but they just don’t make sense for most people anymore.

And just as most people are happy taking pictures with their phones, most people would be happy just being able to get where they’re going. Most people don’t care about film (or fancy DSLRs), and they don’t actually care about cars, they just use them because there isn’t a better option.

Back on my train leaving Detroit, the experience got better once we got going.

There were incomprehensible, squeaky announcements that nearly broke my ear drums, but I’ve heard those on trains in tons of countries. In business class, they offer a coffee and newspaper, just like on Italian trains.

And I got to Chicago a mere 30 minutes behind schedule. I’ve had that kind of delay in Europe tons of times, although I don’t remember a single delay in all my weekend train travel in China. (Which you can read about here.)

(You can see the map of all the Amtrak passenger train lines here, along with real-time locations of each train. It’s kind of shocking to see how few routes and actual individual trains cross such vast areas of the US.)

Still, somehow, the traveler in me loves riding these trains.

Economically and environmentally, of course it makes no sense that we’ve let trains remain a relic of the past. Maybe in a few years we’ll have updated tracks, expanded routes and frequencies, and added a bland, polished boarding process that will make getting on a train in Detroit feel just like getting on a train or a plane in any other city in the world.

But for a traveler, Amtrak as it is today is an absolute jewel.

If air travel is sterile and uniform, with every major airport in the world feeling pretty much the same, train travel is the opposite.

It is nowhere near glamorous, but it has character in many forms: The uniquely laid-back feeling of covering distance slowly and seeing beautiful country pass by your window (a sensation you usually don’t get on the freeway). The spacious seats where you can actually stretch your legs (even in non-business class, where – more than once – I’ve done the three-day trip across almost the entire country). And of course the fact that this slow travel is much less polluting than flying or driving.

If you’re visiting the US and (as a few adventurous Europeans have told me they do) you want to see the real America – the gritty, stubborn, imperfect, Wild West of America – well, Amtrak is still one place to find that.

Following Tilted Map on social media is great for keeping up with photos & quick tips... But those websites change their algorithms all the time, meaning you'll often miss the best part – my actual articles!
Signing up for emails is the simplest, surest (and FREE!) way to make sure you don't miss the next useful blog posts about travel & sustainability!

(Don't worry, I never share your email address, and I never send more than one email a week. Often less.)

A tiny drop of pride in the middle of the Mediterr

For the first time in a while, I’ve hardly taken

Traveling & living more sustainably doesn't have to be hard. Sign up here for the inside track: