Sustainable travel doesn't have to be hard. [Sign up here for exclusive content & new articles by email.] 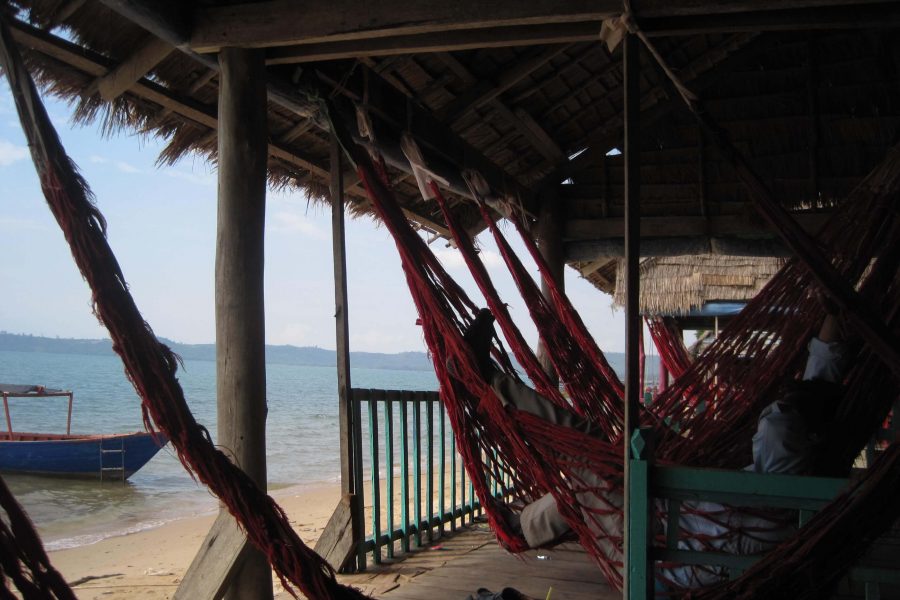 This was what I would call a travel mishap that turned into an adventure: On a boat, in Cambodia, by myself. It could have been much worse!

1:20 p.m. My tuk-tuk driver leaves me where he probably thinks I want to go: in front of a quiet guest house occupying a few yards of land between the pot-holed road and the Bay of Thailand. As I had been told to do, I walk a few doors down to the unremarkable Restaurant #41 and ask the young waitress/bartender/cook about a boat to the small island where my friend from home (probably still) works. Hopefully.

“Okay,” she responds, and walks away.

There are no other customers at the restaurant and absolutely nothing going on, but I’m practicing being island-cool, so I don’t press it. I wait. I drink a coconut. I take a nap in a hammock. Sometime later in the afternoon I ask again, “Umm… boat?”

“Okay, okay,” she says softly. I take another nap.

5:15 p.m. A rusted, narrow, turquoise fishing boat sputters toward the shore. The man at the helm hops into the water as the boat slides to a stop in the sand. He’s a head shorter than me, and wearing pants that might be a skirt in a way that only southeast Asian sailors can pull off. He climbs the short ladder from the beach directly into the restaurant, laughing for apparently no reason. He looks at me, grins, points at the boat, and asks, “Crusoe Island?”

The Captain nods and sits down. The “okay” lady brings him a beer. It’s not time yet.

5:45 p.m. After Captain eats dinner, I help him push the 30-or-so-foot-long, six-foot-wide boat off the beach, and he fires up the motor. We’re off, quite literally sailing into the pink and blue sunset on the bay, bound for a mostly empty Cambodian island that I know nothing about, except that a friend told me a month ago that she was there, it was paradise, and she planned to stay. Later, I’m told people really do call the man “Captain.”

Captain, whose real name is Jiet, looks embarrassed. I smile and give a little laugh, trying to show how calm and cool I am, and how much confidence I have in his captaining abilities. He laughs and lifts a tool box out of the hull and starts wiggling some nut or bolt with every grimy wrench. None of them seem to fit.

The sun has sunk below the horizon and the sky is turning purple.

6:15 p.m. Captain hangs up the phone, shakes his head, and drops the anchor. Shit.

6:20 p.m. I fish my headlamp out of my giant backpack in an attempt to be a little bit useful with the repairs, and try to keep it pointed at the right spot, which, as my Dad could tell you, I have never been all that good at. Captain finally finds a wrench that seems to work.

6:25 p.m. The wrench slips out of Captain’s hand and plops into the ocean.

He gasps and looks up at me like he’s wondering if I’m about to freak out.

I do not. I’m starting to find this hilarious, and soon we’re both laughing. We must be having fun! I think we’re bonding.

I ask him if he speaks French; given Cambodia’s colonial history, it wouldn’t be a total shock. “No, no, no,” he says, chuckling. “Español?” Haha, no. Worth a shot.

6:30 p.m. It’s completely dark. Captain makes more calls. I’ve been in Cambodia no more than 18 hours and I’ve managed to get myself in the middle of a large body of water with a stranger who only speaks Khmer, and exactly one granola bar.

“Well,” I say, because it seems wrong to keep silent when you’re sharing a tiny space and a specific goal with one other person, “At least it floats … ?”

He laughs and shakes his head that he doesn’t understand, then says something in Khmer.

I laugh too, because this is ridiculous, and say something in English that I don’t remember. Probably along the lines of, “Haha, I hope I don’t die.”

7:16 p.m. The man lights a cigarette, lights the Christmas lights dangling in clumps from the rafters covering the middle of the boat, and begins pulling up the anchor with his bare hands, cigarette dangling from his lip like a fish hook.

7:25 p.m. We get stuck on a coral reef. We’re maybe 50 feet from shore and the water is only a couple feet deep, but the coral is razor sharp in places and inhabited by terribly pokey sea urchins, plus it’s dark, so we might as well be 50 miles away, as far as I’m concerned.

7:30 p.m. I essentially stop paying attention because I see the vague shape of a large man with a flashlight swim-walking toward us.

As he gets closer, he calls out to ask if we’re okay. I laugh, because everything is still hilarious to me and Captain, and tell him we’re fine. I ask him if he brought beer, to prove how okay we are. He did not, but he spoke English with a North American accent more welcome than any I’d heard in my four months since leaving the continent. Two hours is long enough when it comes to being ship-wrecked.

Jiet and our rescuer, who was working on the island as a bartender, eventually managed to push the boat off the reef while I stayed on flashlight duty.

Later that evening, Jiet’s Cambodian boss (and the owner of the campground where he worked, along with my friend and the search-and-rescue bartender) told me she was the person the Captain had been calling. She also mentioned that he had been unsettled by my laughing. As it turns out, Cambodians laugh when they’re nervous. So every time Jiet laughed – probably afraid I was about to have a panic attack on his boat – my laughing along with him just frayed his poor nerves even more because he thought I was nervous, too. (Which I was, obviously. But I thought my laughter was conveying a sense of confidence.)

I always like to travel by land when I can, as opposed to by air, because I feel more aware that I’m actually going to a new place when I get to watch all the in between places passing by my window. I can now say the same about traveling by sea. Never have I felt more conscious of the fact that I was going far, far from home, than when I was wondering whether I was ever going to get there. I was so aware of it, I hardly left the island for almost three weeks.

There are a lot of good environmental & ethical re

I’m not sure if anyone cares about my architectu

WTM TAKE-AWAYS: Lots of you responded to my stor

There are a lot of good environmental & ethical re

I’m not sure if anyone cares about my architectu

WTM TAKE-AWAYS: Lots of you responded to my stor

💡🇨🇦 Best views at the best price. This l